“Minami Town” is the town of “NIGIYAKASO” which means depopulation but lively Minami Town was born on March 31, 2006, when Hiwasa Town and Yuki Town merged.
Hiwasa Town and Yuki Town have long been called KAMINADA and are located in the southeastern part of Tokushima Prefecture.
The north is adjacent to Anan City, Naka Town, the West is Mugi Town and Kaiyo Town, the Southeast is overlooking the Pacific Ocean and as good fishing ground with warm Kuroshio Current.
The Coast is an extremely varied coastline with sandy beaches were sea turtles lay eggs, tied Island, remote Island, sea cliffs, Sea hollows, Sea caves and various reefs Designated as “Muroto Anan Kaigan Quasi-National Park “it is a scenic Rias Coast.

Minami Town and Cairns City established a Sister City relationship with the cooperation of the Australian Embassy due to a relationship of the sea turtle on April 1969, various exchanges have continued to this day for more than half a century.
In 2019, the Sister City relationship marked its 50th Anniversary and a delegations visited Cairns City from 22nd to 27th August. And held various events such as Japanese Traditional Puppet Show Joruri, which was a revived art for the first time in 100 years, performed by the group called “Akamatsu-Za” in “Cairns Festival for a celebration of our the remarkable relationships.
The number of foreign tourists to Minami Town has been increasing year by year, especially Yakuo-ji temple visitors.
Also, In 2021, it became the venue for the “World Masters Games Kansai”, triathlon and aquathlon competitions.
In the future, we would like to be able to exchange not only in local government-led exchange projects, but also at the community and private level, such as culture, sports, and industry projects.
In addition, as Minami Town where entertainment culture remains, I would like to promote by thinking about the creation of a community, that is friendly to foreigners with participation by residents, referring to the ideas and know-how of the sister city Cairns. 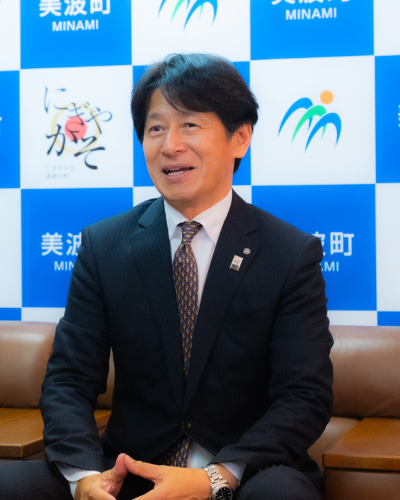 Minami Town is with the sea and mountains, seasonal scenery and is rich in nature.
Traditional festivals, newly born festivals, the thoughts and people living in nature with skills adding to Minami's history.
Please explore and find something about Minami town that you do not know?